We recently moved into a new house. As most people know, moving can be stressful, but this was something else altogether. When we looked round the property we had been impressed by the Georgian windows, the beautiful front door and the conservatory which led out to the garden. All the other aspects you usually check when looking round a house seemed fine. As the house was in a nice neighbourhood we had wanted to move to for some years, we jumped at the chance to buy it. 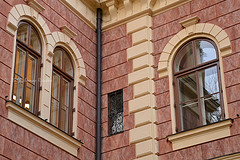 Fast forward a rather long and tiresome three months to moving day. The truck was packed, our old home emptied. We said our goodbyes and hopped in the car, excited to be on our way. With happy hearts we drove the three mile stretch between our old and new homes.

However, that feeling was abruptly ended when we reached the house. A wave of shock swept over me instead. Where once the bright, beautifully designed front door had stood, there were now two large holes. The windows we had so admired were moulded over, with several panes missing. Round the back of the property we were disturbed to find that the conservatory had been broken into and vandalised. All in all, it was rather shocking.

So, whilst also moving all our belongings in and trying to clear up the mess that was left behind, I was also tasked with the job of finding a decent window, door and conservatory suppliers. I needed someone who could not only fit new panes into the door, but also replace our once lovely Georgian windows. At the same time, we were faced with the task of pretty much rebuilding the conservatory from scratch. Quite a tall order, indeed.

After doing some research into different options, a friend suggested a company that they had previously used and been pleased with. A couple of quick phone calls later and a fitter came out to visit. He was very kind and extremely sympathetic as to the nature of our situation, understanding that we needed to have the changes made fast. We agreed a quote and the work started a swift three days later.

My wife and I were very pleased with the results and felt that the fitters had been polite, professional and friendly. As you can imagine, we were feeling pretty shaken at the time by the experience we had had in moving into the house, so it was nice to have someone kind at hand.

A year on and we have very much made our house a home. The new conservatory is wonderful and we love to sit out there in the evening. You can’t tell the difference between the replacement Georgian windows and the originals, and the front door looks even better than when we first visited the house. All’s well that ends well, as they say.

After encountering some difficulties when moving into a new house, Graham Penton and his wife Jill employed www.vevowindows.co.uk to help them sort out their windows, door and conservatory.